I have trained in the martial arts since 1981, initially Karate and Jiu-Jitsu, opening my first club in 1992 and having the honour of teaching Beverley Knight. In 1994, I started training in Wing Chun Kuen, progressing to join the Midlands Wing Chun Kuen in 1995.

I have travelled to Hong Kong several times to train with some of the top instructors,  including Ip Man’s eldest son, Ip Chun. 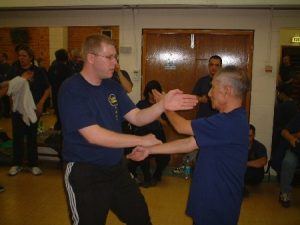 My passion for the martial arts led to my PhD thesis, exploring the anthropology of the Ip Man lineage of Wing Chun, while similarly exploring the psychological benefits of training.

Although my attempt to detail the anthropological development of Wing Chun has prompted criticism from some quarters (predominantly for challenging non-academic perspectives and assumptions), my thesis has yet proven to be incorrect, furthermore few, if any, have added to the discussion.

I have had the opportunity to work with high-profile frontline security, front-of-house security for large, high-profile establishments, and so forth.